Being an advocate for eating insects in the west 2018 is something completely different then doing it twenty years ago. We who are doing it now really owe a lot to people who tried making people open their minds long before FAO, United Nations Food and Agriculture Organization, in 2013 released the report that made it more acceptable.

One of those pioneers is the Belgian entomologist Peter de Batist. I have seen his TED X-talk from 2014 and read about his own version of the now a days well known “paleo diet”. As I was curious about his story I sent him a couple of questions, and received some really interesting answers. Enjoy!

Bugburger:  I read that you started eating insects in 1995, how did you get into this? What made you interested in eating insects?

– No, I actually ate my first insects in 1964 when I was in the army.  There, due to lack of hygiene and discipline in the kitchen, Cockroaches were frequently mixed with the food and salad was badly washed so a caterpillar could also occasionally be consumed.  As I was an amateur entomologist I found these experiences more interesting than repulsive.  But I realized that this was not the common response.  My fellows in the army ate them also but they weren’t aware of this, and I never told them.  But now, at least, I knew that I didn’t die or suffer any other health discomfort after eating insects. 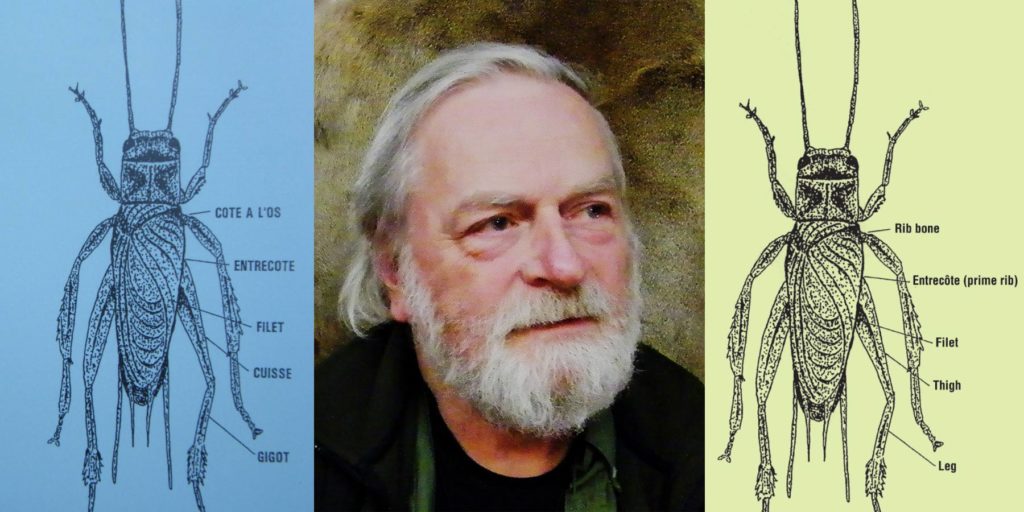 Peter de Batist made the illustration of the cricket in 2001 as a seasons greatings card. You might recognize the versionon the right from The Insect Cookbook by Arnold van Huis, Henk van Gurp and Marcel Dicke.

Bugburger: You have been working a lot with promoting insect-eating. Could you tell me what you have done through the years?

– After the army, through the years, I collected some papers about the subject.  There were only a few in the pre-internet period and they were rather hard to find.  They all were fixed on the protein content but the information wasn’t very reliable.  Some papers talked about 9 to 25 % and others (especially the French investigations) came to 40 till 75 %.  In 1993, the Royal Antwerp Entomological Society, of which I was a board-member at the time, organized its annual exhibition with the theme ‘Applied Entomology’ and next to well-known items as Beekeeping, Silk culture, Insecticides, Malaria treatment, Pollination, Bio-control and Forensics we had a small stand about edible insects with the opportunity to taste them.  It created more press and public attendance then all the other items in the hall together.  At least, the public was curious about it.  This first time people came mostly to see if it what the press had revealed was true.  But the year after they had convinced themselves they must try it.  As publications about the subject always lacked the necessary dietary and culinary information, I decided in 1998 to live on the diet of the first men. The origin of this idea was an article called ‘The Dawn of Humans’ published in National Geographic Magazine’ in 1997.  One of the interviewed Anthropologists stated that the first hominids were Insect-eaters.  That sounded great and logical to me.  I started to imagine what an Australopithecus diet must be like and I submitted myself to it for a year.  That convinced me that feeding yourself with insects as the main animal protein source is much better than the overall West European or North American diet.

Bugburger: What did you start in 1995? And how were the reactions among people at the time? And do you feel that the attitude has changed?

– Well, in 1995, I started selling insects in my shop. A few years before I had started up a small company that offered ecological services (in gardens, garden-ponds, aquariums…) and the first clients for edible insects were those guys who were interested in survival.  They were not only interested in the knot, rope and sheltering techniques but also in the search for food that is available in nature.  Other clients were television producers who wanted to use them in shows as a horror effect.  But that was not my aim!  However, they backed off when they realized I was not interested in the horror part.  But then came interest from shops and manufacturers of outdoor materials and event executives in search of good incentives.  There was always the same response:  A few of the visitors or participants were shocked but most of them were curious and after a good talk about the health benefits nearly all of them would give it a try,  only to discover that the insects tasted fine.  This attitude hasn’t changed much nowadays but, because of the increased media attention, people aren’t so surprised anymore and the battle between repulsion and curiosity goes over more quickly.  In 2002 I also started giving survival food courses which were well attended.  And in 2004 this was extended to a prehistoric food course in which insects and other invertebrates formed a substantial part.  That was a topper!

Bugburger:  Can you tell me about your experience with the “Australopithecus’ insectarian diet”? 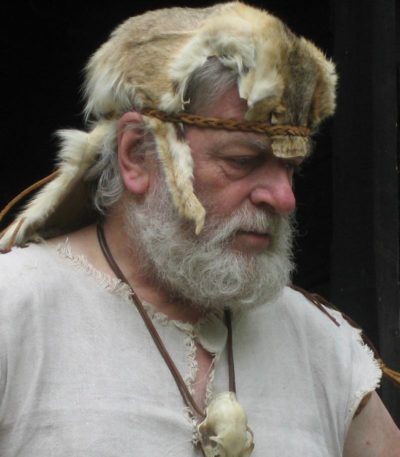 Peter de Batist. Photo taken during one of his pre-historic courses. All prehistoric topics were treated in short workshops : making fire, making knives from silex, making and using hunting weapons, butchering, conservation of food (drying, smoking), etc. This was from the workshop clothing…

– I realized very soon that composing such a thing as an ‘Australopithecus diet’, was not finding things that would be no longer available, but rather eliminating the ‘modern’ industrialized foods that were added during the last 15.000 years.  What I try to explain is that food is a matter of instinct.  And there are six types of food that were added to the natural food which the hominid species was designed for by instinct.  Our better ‘neocortex’ taught us that we can do such things. They permitted our species to grow to uncountable numbers and we were told that these new foods were very beneficial for our health. These six foods are Grains (bread, pastry, sauces and snacks), Dairy (milk, cheese, butter and desserts), Salt (in nearly all industrialized food), Refined Sugar (in nearly all industrialized food), Alcohol (For occasional use it is now degraded to an everyday substance) and Plant-oils which do not exist in free nature. (This technical product is certainly overused).

After one year of dieting, I was convinced that consuming these six things frequently makes people unhealthy or even sick.  Moreover there was one thing that was lacking in the last 3.000 years of the ‘civilized’ diets. Yes, indeed, insects.  In my Australopithecus diet I used them on a nearly daily basis.  A problem was also that this type of food was considered to be a raw- diet.  So, in that year I myself learned that raw insects tasted even better than the cooked ones.  But such an idea is surely harder to sell!

After a year of dieting I counted my considerable health gain and decided that raw greens, fruits and insects are really that good.  Not simply healthy looking (health-wise). I also observed a sharper working immune system.  Difficult to explain but you know you have it. Cuts and bruises healed within a day or so and infections or attacks of virus were reduced to a minimum.  Each new meal we tried was somehow monitored in calories, proteins, fats and carbohydrates and compared with another meal from the ‘traditional’ kitchen. But the lack of nutritional information about insects made these exercises not so valuable.  Most of these nutritional values I found in books about aquaculture.  But in 2002 the study of Dr Finke, an American food scientist published the data of nearly all important nutrients in five commercially available cultivated insects.  So we learned that the proteins contained all of the 21 necessary amino-acids.  No less than 14 vitamins were present, 12 of the most important lipids and the 10 most important minerals.  That surely gave other prospects. Some meals were re-counted and then the figures balanced and showed that insect meals had a better nutritional composition.

– Well, I love to eat raw Mealworms and Buffalo worms.  Their downright nutty taste is very pleasing and reaches every taste bud.  Moreover, they are easily available in any pet shop and may even be home-farmed with a little knowledge and a minimum of material.

For a more organized meal, which we usually made during the monthly cooking workshops we organized in our Eco-Shop in Antwerp from 2006 to 2016, I made recipes for wonderful soups, entries and desserts.  They are generally cooked, thus not raw, and I always somewhat regret that but most people are more comfortable with a cooked meal. I admit that the ‘recistances’ (main courses) in my menus are not so bright.  I didn’t like them very much myself.  The last recipe I made was for something wonderful I called ‘Chanikiwit soup’. It is made with Parsnip and Avocado and braised Mealworms or Waxmoth pupae are added just before consumption. The name comes from a Kiswahili word for a special shade of light green.

Bugburger: You told me that you are retired now, does this mean that you have quitted promoting edible insects?

– I don’t think that anyone who is a somewhat passionate about insects (thus not only in the culinary meaning) ever really retires.  In the summer, a friend of mine who runs the B-Activity-center in Ulvik in the Hardanger region in Norway, convinced me to give insect workshops for tourists who really want an extraordinary experience.

The translation of all the recipes in my Cooking-book from Flemish to English is another project.  And here in Belgium I am frequently contacted by public services and groups of students who want to make a project about this ‘new’ food.

A book about all my experience in insect-culture (45 years) is also in project and is going to be written directly in English.

Bugburger: What do you think about the future?  How far in the future will insect eating be thought of as normal in Europe?

– After eating insects for nearly 50 years I’m sure that they will have a future in food supply.  I was rather surprised when I learnt that the European Community absolutely considers them as novel food.  Mankind has eaten insects for a few millions years.  We don’t need to approve that.  All the tests they usually do now in Universities I’ve already performed myself at the beginning of this century.

– Yes. The 10 insects which are selected by the Belgian Food Security Services are not the only ones which are available.  I’ve tasted nearly 500 species of insects up to now, during the survival courses or travelling in the tropics.  Try it yourself.  All young grasshoppers, butterfly- and beetle-larvae or pupae are non-poisonous and don’t transmit diseases to humans.