The best edible insects around the world: according to Les Criquets Migrateurs

Since the 2012 FAO report a lot of Westerners have opened their minds to eating insects. Media keeps reporting the story: Eating insects is the food of the future. Often, but not always, mentioning that eating insects already is a tradition in a lot of cultures around the world and that two billion people regularly eat edible insects.
But I really think the stories about these edible insect traditions don’t get enough media attention. The few times I do find stories of this kind I get really excited. When Nordic Food Labs film “Bugs” came in 2016, followed by a television series, I was ecstatic. Following Josh Evans and Ben Reade’s culinary edible insect adventures around the world gave many insights and made me hunger for more knowledge.

So when I in 2018 read about the Les Criquets Migrateurs-project in Florian Nocks blog my expectations was high. And now almost two years later I am happy to say that Sébastien and Annies documentary trip have resulted in eight fantastic youtube episodes from Japan, Cambodia, Thailand, Australia, Mexico, Cameroon, Zimbabwe and Europe.

I think you should see them all, and if you, like me, are interested in knowing more about Sébastien, Annie and their thoughts after making this culinary trip, please read my interview with them below the first episode of the series! You will also find out which insects they liked the most!

Bugburger: First, can you tell us a bit about yourself, what’s your background, and how did you get interested in the concept of eating insects? 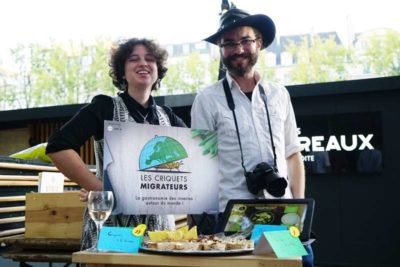 Annie and Sébastien after they came back from their trip.

Sébastien: So, I am an agricultural scientist who’s been working on edible insects and insect farming since 2015. Everything started in 2011, when I had to choose where my studies should head to. One night, on the news, edible insects in Laos were discussed, and I was kind of fascinated. These were ingredients that we did not have at all in France – there was a whole culinary culture we had no idea of. I wanted to learn more about this gastronomy, see how we could make insect farming work in our culture, and how it could impact the way we think about food in France. Of course, in order to understand how edible insects are worked in cultures, I had to travel and visit the places where they’ve already been part of the cuisine for millennia’s – which is what Annie and I finally did with the Criquets Migrateurs project.

Annie: I’ve been a few things during my life: a chemist, a workplace safety specialist, a teacher, and now I’m working in science communication. Watching a reality show about pseudo-survival on islands when I was a kid, I told myself I could definitely eat those huge worms in order to grab victory for my team, but it was just a thought until Sébastien came into my life and let me actually test some insects. Turns out I like them. When he told me he needed someone to accompany him around the world, I couldn’t say no to this opportunity.

Bugburger: Looking at the episodes it seems that you have made a lot of research beforehand. How long have you been planning this series and how did you find all the places you visited?

We planned this project for about a year before actually taking off. First, we mostly spent our time researching the topic and listing the places that were mentioned in the literature – FAO’s report about edible insects was a great help for that. Then, we had to shortlist the countries we wanted to visit. We picked the countries that had the strongest reputations for edible insect cuisine, the places where we’d get to taste the most interesting and intriguing insects – and of course a couple of places that we really wanted to visit. We tried to plan our itinerary in order to give a global and accurate representation of edible insect cultures around the world – although that’s always kind of tricky. Each country has its own bugs, and its own ways of cooking them. Even when an insect is cooked in several different countries, the recipes will change – hell, even in one single country, if you travel for about 50 kilometers, the way insects are cooked can completely change, so it’s kind of impossible to give a complete picture of insect cuisines in the world. Nonetheless, we tried to give an interesting overview with compelling themes – and we’re quite happy with our itinerary choices in the end.

Bugburger: I get the feeling that you have learned a lot during your tour, what are your best takeaways? What did you learn that you didn’t know before?

We did learn a lot indeed – and one of the most compelling things we learned was how the mundanity of edible insects put our own relationship to these ingredients in perspective. Around the world, most edible insects are harvested in the environment – insect farming is actually kind of a late method of producing them. But they’re not necessarily perceived as “edible insects” like we would classify them. In cultures where insects are eaten, just like in cultures where they aren’t, things are classified in two categories: “this is edible”, and “this is not”. “Insects” aren’t a food group on their own, you’ll have insects in the edible category, where they’ll be perceived as regular food, and insects in the unedible category, where they’ll be perceived as disgusting pests. When people get home, they’ll think “hey, let’s eat termites tonight!” rather than “hey, let’s eat insects tonight!”, just like we’d have “chicken” for dinner rather than “edible bird”. In the end, it’s in western cultures where eating insects has been so conceptualized that we created a whole category for it, an almost phylogenetic approach that isn’t quite relevant in cultures where edible insects are common. The only ones “eating insects” around the world are, in fact, us westerners.

Bugburger: I must say I am rather envious of all the insects you tried out. What are your favorite ones? Could you even make a top three list?

Sébastien: We had this question a lot, and it’s always really difficult to answer that one! But a top three list, that I can do:
I’d say Cambodian tarantulas – they’re like crab, only better!

Cambodian tarantulas! Great food according to Sébastien and Anne (on the right you also find a fried scorpion) (photo: lescriquetsmigrateurs.com)

Mopane caterpillars. One of both Annie and Sébastiens favorites. (photo: lescriquetsmigrateurs.com)

Annie: Best fresh ones would be Cambodian tarantulas and mopane caterpillar ; for the prepared ones, I’ve been pleasantly surprised by some preserved shea caterpillars from Burkina Faso, which were the best dried caterpillars I’ve had yet.

Bugburger: Every episode also has culinary bonus film where you demonstrate how to cook the insects. Its looks so delicious! But: you are always using fresh insects. Is it possible to make these recipes with dried insects you buy online?

Thanks, we’re glad you enjoyed the videos! Yes, finding fresh bugs is always the tricky part when you don’t live in places where harvesting insects isn’t part of the culture. These videos were partially made with a documenting goal in mind: we wanted to document the recipes as best as we could, but presented in a way where people would feel compelled to taste the dishes and realize that they could, in fact, cook these foods themselves in their own kitchen, and that insects are very real and delicious looking ingredients. Now, although fresh ingredients are better, a lot of these recipes can also be made with dried insects. And you don’t always have to cook by the book either! If the recipe doesn’t quite match the ingredients, use the videos as inspiration rather than a strict guideline.

Bugburger: If you are really busy and think that you only have time to see one episode…. which is the best one, the episode no one should miss?

Tough question – it’s hard to pick a favorite. But let’s say, if you’re interested in learning about insect farming methods, watch episode 3, which is about Thailand and the different farming system that were developed for local insects. If you’re interested in learning about catching insects in the wild, watch episode 6, which is about harvesting wild edible bugs in Cameroon. And if you’re after a think piece about the relationship between Europeans / western cultures and edible insects, we recommend the final episode about Europe.

Bugburger: What happens now, when you are back? Do you have new edible insect projects on the horizon?

Now that we are back, we sort of continued our regular lives. Annie is a scientific mediator, and Seb is working in a French company that farms black soldier fly larvae for animal feed. But from time to time, we’ll animate workshops about edible insects! Also, we occasionally get emails from people who found our website and want to start their insect farms and need advices or contacts. Other than that, maybe one day, if we have the time, we’ll try to write a book about our adventure around the world.

Thanks for the interview! Everyone out there: see the films, and recommend them to friends!
Au revoir!