2020 – The year of the Bug burger and edible insects in Europe?

Soon it’s been seven years since FAO released what “entopreneurs” often refer to as “The report”. 200 pages that opened many westerner’s minds and made us aware that it makes sense farming and eating insects.
About one year later (in 2014) I started this blog and it’s been a truly thrilling experience observing all the enthusiast starting up companies, farms and projects with the same idea: eat less traditional meat and more sustainable “insect meat”.

2019 was an interesting year for the edible insect industry. The business is still dominated by idealistic pioneers breaking new ground in their home countries, but some of these pioneers are now more established and are starting to make money and a bigger impact. Neil Whippey co-founder at UK based Eat Grub (established 2013) tells me that 2019 have been their “record year by far”:

– I think for us the biggest change is the number of big corporations getting on board. We’re working directly with a number of companies helping them to realise their insect ambitions in the right way for them. We’ve worked with Lidl Germany very successfully, Sainsbury’s here in the UK, as well as a number of restaurant chains and food manufacturing companies. 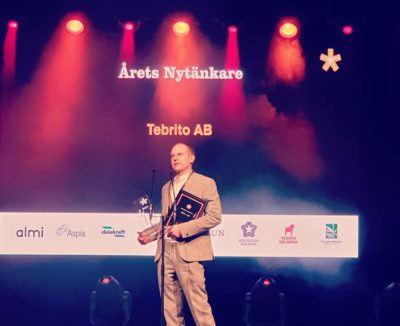 Tebrito one of the survivors. Here a photo from 30 January 2020 when Nils Österström received the award “Innovator of the year”.

Casualties along the way

Neil Whippey is one of the ento guys I contacted late 2019 to get their view on the business and what we can expect. Unfortunately not everyone has had the same fortune as Neil, and Eat grub. A lot of companies all around the world have closed shop or decided to change its business plan. Looking at my home country Sweden we only have one surviving pioneer (excluding Thai/Swedish Global Bugs): Tebrito who have made big investments in 2019 and are starting up a big mealworm farm. Swedish Nutrient that a couple of years ago had similar plans have gotten tired of the legal situation in Sweden (we are still not allowed to sell insects as food), changed its name and turned to developing plant based food. Cocky Swedish startup Eat:em who have been selling protein bars and crispbread from Denmark (to make it legal) decided to really make an effort to expand in 2019, but declared just a couple of weeks before Christmas that they give up (update August 2020: Eat:em will continue).

From hype to normal

From Finland I got reports from a couple of people that 2019 has been a year when the hype of 2018 (after edible insects became legal food late 2017) died off, and a couple of insect companies quit making food products. Entocube is one of them. Jaakko Korpela tells me that they will focus on rearing crickets and cricket farming technology. Savonia grasshoppers quit just a couple of months after Bugburger gave them rave reviews for their roasted crickets. But there is still a lot of confidence in the business. Finnish Entis have released a couple of innovative products during 2019 and just released their cricket-pea-protein powder. Antti Rehn from Griidy tells me that they are convinced that there is an interest in insects as food ingredients. This spring they will launch precooked whole crickets that you can buy in food stores and stir fry at home. (I am really looking forward to this!)

The companies are getting more mature in a still very immature market. Or maybe we should say unevenly mature market. We are seeing signs that that edible insects are moving from being regarded as a novelty to being regarded as proper food. One example is UK based Crunchy Critters (established 2011) who decided to rebrand and redesign its website to move with the changing attitude.

Sherlock Studio who made the rebranding explains:
“Traditionally, the consumer profile for edible insects in the UK has comprised those looking to eat them as a dare, and those trying them as part of an educational project.
With growing concerns over the environmental impact of farming livestock, and an increased interest in alternative protein sources, retailers, restaurateurs and consumers are starting to take a second look at insects as a serious food of the future.”

Neil Whippey mentioned a bigger interest from traditional food companies. In Switzerland meat company Micarna have worked a couple of years on developing meat alternatives using insects. Meinrad Koch tells me they successfully launched there insect based balls, named “Popbugs” in southern part of Germany in February 2019. During the year they have refreshed the packaging design and renamed their products Simply Bugs Balls, and their own bug burger Simply Bugs Burger. According to Meinrad Koch all their surveys and tests show that taste is the key factor to success. 2020 they hope will be the year they will spread burgers and balls over Germany.

Edible insect companies are getting more mature but we are also seeing signs of a growing infrastructure making it more easy working with edible insects. The organisation Ipiff (International Platform for Food and Feed) is doing an important job here. In 2019 they published a very useful guide on legislation, a guide for how to label insect products and a guide on hygiene standards for insects rearing. In 2019 we also for the first time saw the word “insect doctors” promoting a new education to school a new force of insect experts that can handle and prevent diseases that can plague insect farms.
I would also like to acknowledge Entotrust.org whose initiative of setting up a certification and a seal of approval have a potential to play a big role in making customers trust edible insect products. It’s easier making people want to eat insects if they know they are safe and bred in a sustainable way.

Talking about trust: in Sweden and about half of the EU insects havn’t been trusted as a safe enough food source to make it legal. We are waiting for EFSA, the European Food Safety Authority to give their verdict on 11 novel food applications that have been sent in for evaluation. 2020 is an exciting year as this should be the year that the first applications will be approved. One of the companies waiting for the green light is Dutch Protifarm. Except being big in insect farming the company are investing resources in developing insect food products. In doing so Protifarm has acquired the help from Lee Cadesky, known by people in the ento business for starting C-fu Foods together with his brother Eli Cadesky, and developing an insect based tofu-like product. Lee has moved from Canada to the Netherlands and tells me that 2019 was really intense, developing “the next generation of insect ingredients and products”

-We’ve completed a number of internal and external applied and fundamental research projects with some very interesting results (about which I can’t say more right now) and we’ve completed testing and production of a range of new insect ingredients, says Lee Cadesky.

In December they launched the AdalbaPro ingredient range at the Food Ingredient Europe (FiE) in Paris. Lee says these ingredients will change the range of options available to insect food manufacturers.
-These innovations are delivering more technical ingredients like water-soluble Insect Protein Concentrate, and our new Fiber Textured Insect Protein.

At FiE Protifarm and Lees team proved the use of these ingredients by showing a ready-to-mix protein shake and an insect burger made with their “Fiber Textured Insect Protein that delivers on protein while being absent egg, wheat, dairy, soy, or other animal products.”

What makes 2020 extra interesting for entopreneurs in Europe is that the first novel food applications probably will be approved. I write “probably” as I have been disappointed so many times before. But according to emails with Lee Cadesky Protifarm seem quite confident that their applications for products made with lesser mealworm (Alphitobius diaperinus) will be approved early this year.
So maybe it’s time for me to go back to my plans from 2014 and develop a bug burger? Maybe create one using Protifarms ingredients? Or should I wait for Enorm Bio Factory Black Soldier Fly application to go through and create a McFly? Entovegan Josh Galt have called Black Soldier Fly Larvae (BSFL) “the next insect food trend”, and there is a big plus for BSF: it’s more effective to farm thus making it cheaper. But from a culinary standpoint I am more looking forward to crickets and grasshoppers getting the EU greenlight. Maybe then I could start my own taqueria selling tacos de chapulines?
I think 2020 will be an exciting year for all entothusiasts out there.