A couple of weeks before Christmas I received an early Christmas gift from England. Francesco Majno from Crické food had reached out and wondered if  I wanted to try out their Crickét crackers. Crackers with different flavours containing 14-17 percent cricket powder from ground up roasted House crickets (Acheta domesticus). Of course I said yes, and as soon as we received the package my oldest daughter Vanna and I opened the boxes with crackers and tried them out. They were all great and my daughter Vanna thought they were “fett nice” and I posted a short “pre-review” on Instagram:

Today I received an early Xmas gift from @crickefood My daughter Vanna tried the tomato and oregano cricket crackers and gave the first review in Swenglish “fett nice”, which means “really great”. I’ll get back with a proper review. 😊 #eatinsects #edibleinsects #futureprotein #crickets

Crické food sell crackers with four flavours. We received and tried three of them:
Onion & nigella seeds, Ginger and chilli and Tomato and oregano. The fourth flavour is sunflower and chia seed, and my guess is that these crackers are as awesome as the other ones we tried. The flavours differ a lot and everyone who tried had their favourite. And when I say “everyone” I include 15 people at work and a couple of people at a new year’s eve party.

Yes, I decided not only to rely on Vanna’s and my taste buds but also give people with less experience with insect food products a chance to try them out. At work 15 people, ages 22-55, nibbled at the crackers and everyone gave them praise. The most popular flavour was onion and nigella seeds. My colleague Johan even claimed “it was one of the best crackers I have ever tried”.  One colleague loved the tomato and oregano, and another guy loved the ginger and chilli as the ginger “didn’t take over” and the chilli worked even for “us weaklings who can’t handle really strong food”. 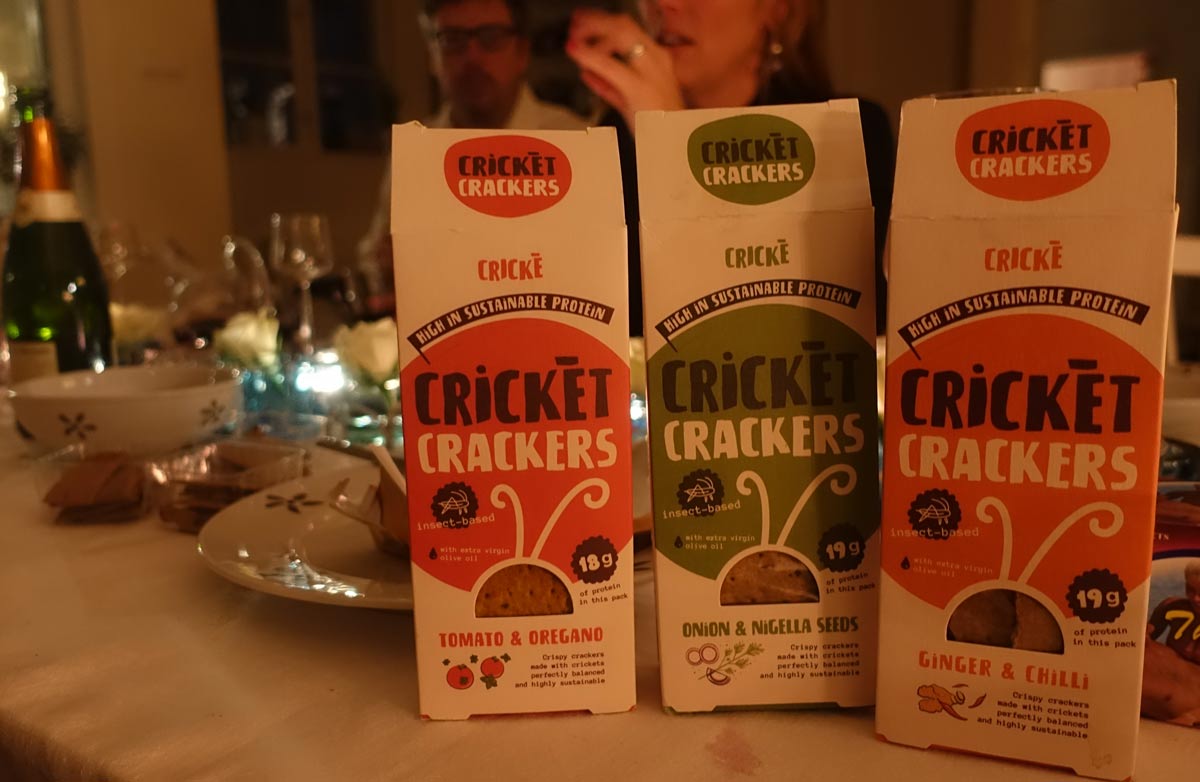 On New Years Eve I brought the three remaining boxes and some cheese to a party. Everyone thought it was a great way to celebrate the turn of a decade, and that 2020 should be a great year for Crické food and their crispy crackers.

A product you can Entotrust

One common problem with insect products (from my experience) is that the taste deteriorates after being exposed to air. If you open a couple of crackers, cookies, crisps, etc containing insect powder it doesn’t taste as good a couple of days later. Crické have solved this problem packaging the crackers in small sealed plastic containers. Open one and consume them fresh and crispy the same night. A great idea with a drawback: A lot of plastic waste. Crické are aware of this and have even written a promise on the box: “We are switching to plastic-free materials with cardboard trays and bio-plastic film.” Francesco confirms this when I ask him. The switch to cardboard trays will be done within the next two months. And bio plastic will be used within six months.

I really love the design of the informative packaging. Also interesting to see a product stamped with the Entotrust-logo a relative new seal of approval. Read more at www.entotrust.org about what you can expect from an Entotrust approved product. Hopefully we will see more products using this certification.

-Where can I buy them? Tomas at work asked.
Well not in Sweden where it still is illegal to buy edible insect products :) But at least until Brexit we Swedes (and other EU-citizens) can buy the products from crickefood.com. Another alternative is Amazon. 12.50 GBP (14.6 Euro, 154 SEK) + shipping for four boxes of crackers is quite pricy. But not more pricy then the cheese you combine the crackers with… and in this case the crackers work great alone.