Five reasons why Finland is leading the edible insect revolution

The Netherlands and Belgium might be the pioneers in promoting edible insects in Europe. UK have a couple of companies with a long history (Eatgrub is one of my favourites). France gave us Jiminis (among many others), Germany have produced a lot of interesting ento-companies lately (Bug Foundation has launched its burger!) and Switzerland allowed a couple of edible insects species in May 2017. But looking at the entoscene in Europe I get the feeling that the Nordic countries (except Sweden and Iceland where it is illegal) have been really good at playing the ento game. The pioneers in the Nordics were Denmark with DTI as a big driving force and companies like Enorm, Crickster, Syngja and Wholi Foods. (If you are in Denmark 21-22 September you can visit Copenhagen Bugfest.) Non EU country Norway haven’t been that good at producing entopreneurs but there are a couple of them (Myldregard was a pioneer!) and maybe the most active is Invertapro, from Voss.

But even though Denmark has some really great companies, and have been selling edible insects in a couple of shops for a couple of years, they are still not as hot as our eastern neighbours: Finland!
Here are five reasons why:

It was big news when the Finnish food giant Fazer released its cricket bread in November last year. What’s even cooler is that it was not just a publicity stunt. A couple of month ago the company said that the bread had been a big success and expanded the sales of the bread from 11 shops to 57 shops in 23 cities. And about a month ago Fazer released a new product: a cricket bun that is sold in even more shops. The new buns contain about 20 house crickets each.
Fazer is a big company with offices and bakeries in eight countries and selling its products in 40 countries. I think having such a big company adopting insects as food is an important reason why the emerging Finnish insect industry has a lot of confidence. When Fazer started out with its cricket bread all the crickets came from farms in the Netherlands. Now at least half of them are farmed in Finland.

Covering insects in chocolate and selling them as snacks is not a unique idea. For Finnish Entis that was just the starting point and they have always claimed they had bigger plans. This summer the plans where revealed when two new products hit the market: The Entis Sirrka smoothie (cricket smoothie) and Sirkkis, a meat substitute. The smoothie product is not unique (Danish Syngja have made a similar product), but Sirkkis is the first of its kind mixing cricket powder with soy making a meatlike product with a protein profile similar to meat and containing a lot of iron and vitamin B12. I am really looking forward to testing the product. 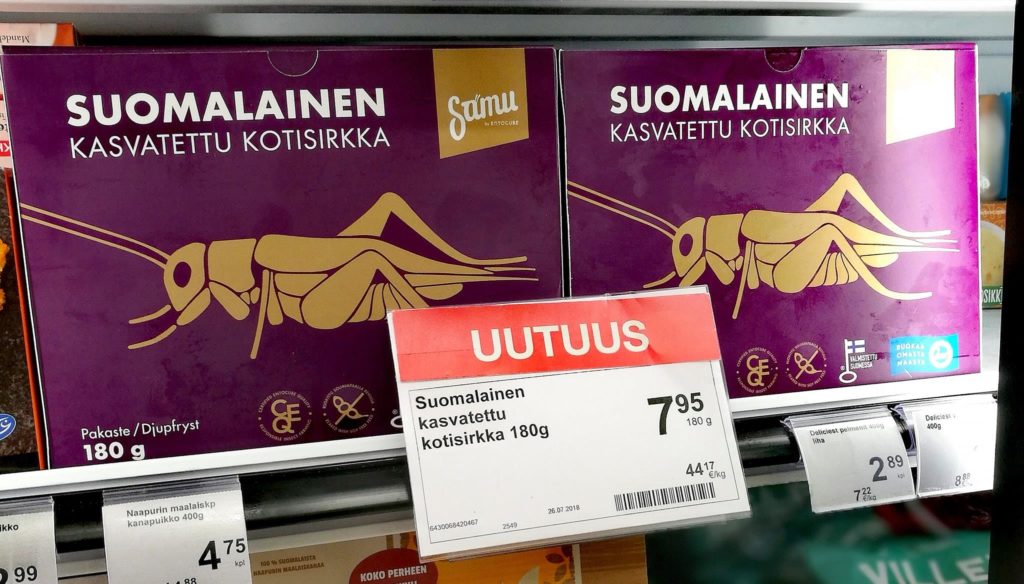 Entocube is one of the early pioneers of the Finnish entoscene and a big part of the reason why Finland decided to make edible insects legal. They have launched a couple of products (snacks and granola) under the brand Samu, but what makes me excited is that they since a month back are testing to sell packets of frozen crickets in a couple of K-market shops. The price point is quite high, 7.95 euros for 180 gram, and maybe we are not enough enthusiasts out there (yet) to make this an immediate success. But we need companies taking these risks so that foodies can discover the quality of fresh frozen crickets. I really love Entocube for trying and hope we will see this in Sweden to!

4. Finland has a great insect chef – and he has released his cookbook!

One who really understands the joy of good frozen crickets is Topi Kairenius. If you want a thriving ento scene you really need a good cook who understands the potential of insects. Topi knows his stuff and the last couple of years he have been working on a cookbook that was released this summer. Unfortunately it’s only in Finnish :(
Looking forward to a translation into English (or Swedish). (check out his website: hyonteiskokki.fi)

In the US we have seen the big cricket farming company Aspire Group buying cricket protein bar maker Exo. We will probably see more of these merges when the market gets more mature. In Finland the first move in this direction is the merging of the companies Finsect, Finnhopper and Griinsect that have joined forces and started the company Griidy. Together they have growing capacity of farming insects and making products.

That was my five reasons. There are more. When house crickets become legal as food all over Europe Finland sure will be in the pole postion.