November has been an really interesting month for those of us interested in introducing edible insects to people who traditionally don’t eat insects. Here are eight  things that have made and will probably make a big impact.

Neil Whippey co-founder Eat Grub on LinkedIn a couple of weeks ago:

HUGE news alert! Really delighted to announce that we are launching our Crunchy Roasted Crickets in 250 Sainsbury’s Local stores…

And yes Neil is right! This is indeed big news.  Sainsbury’s is the first UK based food chain selling edible insects! Joining the ranks of Finnish K-market and Prisma, Danish Irma, Carrefour in Spain, Coop in Switzerland and Rewe in Germany.
The first edible insect product sold is a package of barbecue flavoured crickets. Its a small package, with around  50 crickets (12 g) sold as snacks for 1.50 pounds.
Rachel Eyre, Head of Future Brands at Sainsbury’s, comments:

“Insect snacks should no longer be seen as a gimmick or something for a dare, and it’s clear that consumers are increasingly keen to explore this new sustainable protein source. We’re always looking to provide our customers with new and exciting products, and with the growing interest in edible insects we’re excited to be the first UK supermarket to make these products easily accessible for shoppers across the country.”

Read more about the launch and reactions: The Guardian, The Telegraph, The Independent 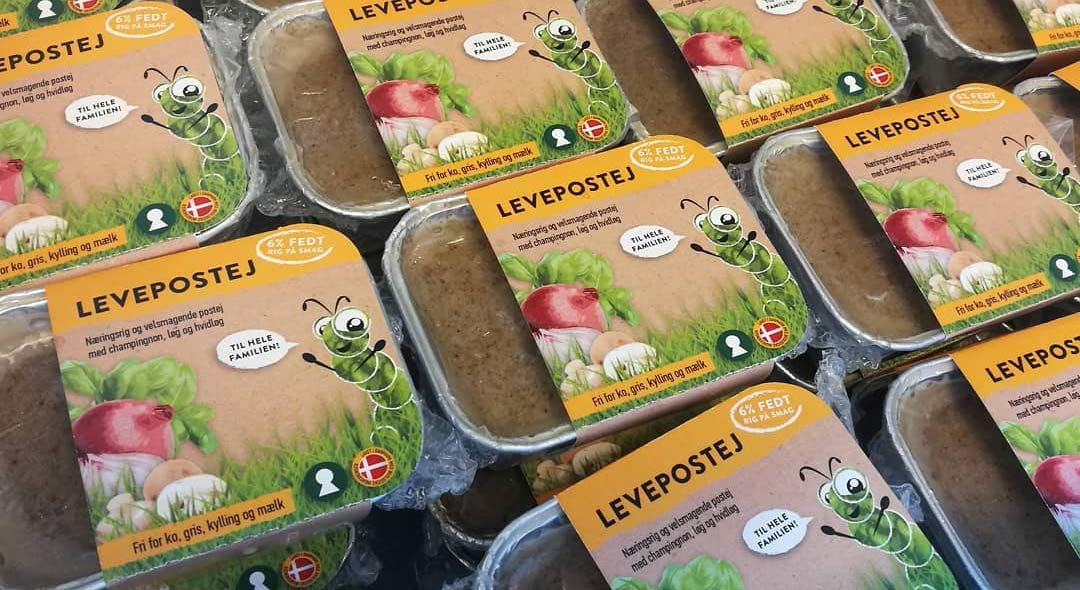 “Levepostej”, instead of the traditional “leverpostej”. Could be translated to “Living paté”

In March I did an inteview with Emanuel Skrobonja at Crickster about their great idea of making an alterantive to one of Denmarks favourite sandwich spreads: Liver paté. A more healthy and environmentally friendly alternative replacing liver from pigs with mealworms. Unfortunately the interview never made it to the blog (but its in the book I wrote), and now I am happy to say that since early November the real products are sold in Danish shops (Salling in Aalborg). I hope it will be a success! Looking forward to testing it!

Living Farms are trying out a new strategy for their invention “the hive”. Launching the kickstarter the Hive Explorer they want to give kids the opportunity to discover the life cycle of mealworms, and how ecology works. A great gift to your kid or the perfect kit for the classroom.

I wish Katharina Unger and co good luck and hope the Kickstarter will be successful!

Check out the Kickstarter here >>

The edible insect movement in the USA seems to have a great momentum at the moment. A couple of months ago the second edition of the “Eating insect Athens” conference, and now in November the second edition of Brooklyn Bugs! This year Joseph Yoon was joined by a couple of well known chefs, among them insect chef legend David George Gordon. One of the things I would have loved to experience is the Bugsgiving Banquet Dinner. And meeting up with “The Cricket Man” from the podcast Entonation.

Some reports from the festival:
Forbes: Brooklyn Bugs And The Importance Of The Edible Insects Movement

The Week: I ate bugs. They poisoned me. Can I have seconds now?

This tweet from the IPIFF conference in Belgium the first week of November made me really exicited. Might this mean that we late next year will have at least one insect species approved all over EU? (including Sweden…)

The tweet might not have made headlines around Europe, but in Sweden it gave us hope and some media attention (SVT).

The guys from Griidy, and a photo of how the products (and my book) are sold in the shop.

In Finland selling insects as “kitchen decoration” and “eye candy” when it was illegal to sell as food was an important step to get the attention of both the public and authorities. And it was a move that actually paved the  way for making edible insects legal in Finland. On 30 November Finnish company Griidy made a similar move in Sweden selling a jar of crickets as “Eye candy” in a shop called Happy Food Store, in the Stockholms city centre. I met up with the guys on the second day. They were still selling, but had had a visit from the authorities who wondered why a decoration you put on the shelf have the nutrient information printed on the jar. As a response all the jars now have a sticker och covering the list of nutrients. 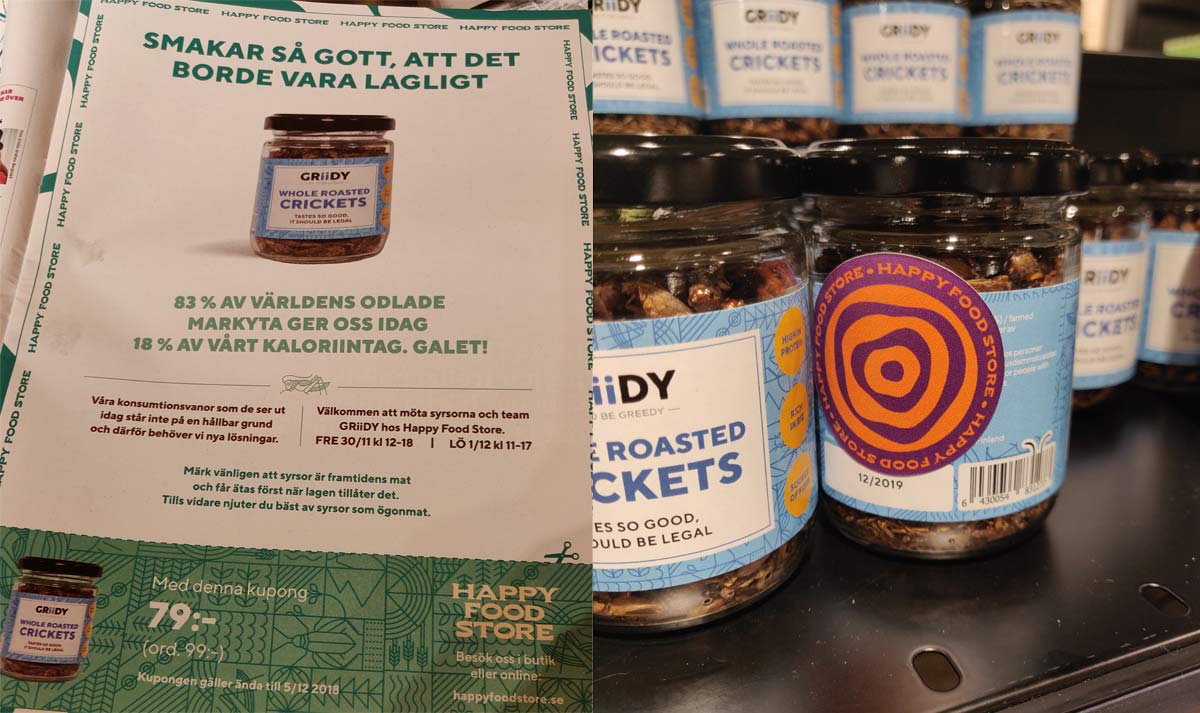 To the left: Griidy bought ads in three big Swedish newspapers: Dagens Nyheter, Svenska Dagbladet and Metro. To the right: The jars with a sticker covering the list of nutrients. 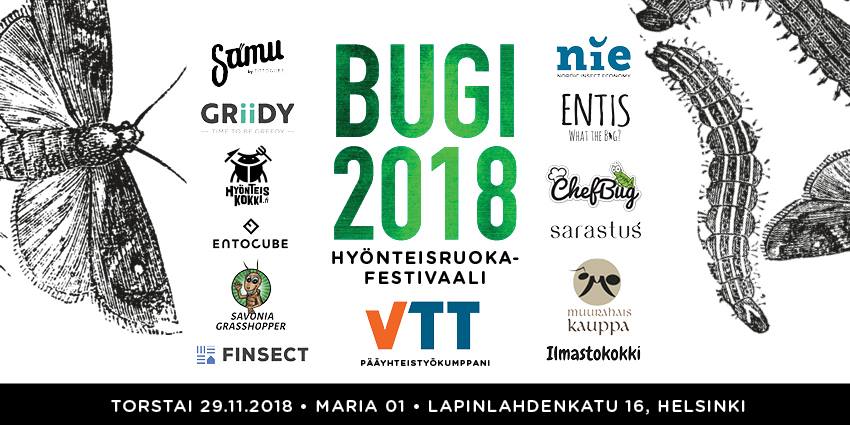 Not only New York has had an edible insect festival in November. On the 29th it was the premiere for Helsinki Bug fest: Bugi 2018. According to the organizers it was a big success. A lot of people attended and journalists from Reuters made report that has made its way around the world.
You can watch it here >>

Illka Taponen, one of the organizers, made an interesting comment after the festival:

News that have not yet been announced is that during a meeting between the insect food companies it was decided that an association will be formed to present the interests of the industry. Preparation works have been started, and updates will be announced in the coming months.

This is really great news!

8. Sweden: The release of my book…

As you can see November has been a hectic month if you want to keep up with news form the edible insect movement. For me its been extra hectic as I, mid November, released my book on eating insects. A book in Swedish that have received quite a lot of media attention (newspapers, radio stations, tv) and put the spotlight on the topic of eating insects. 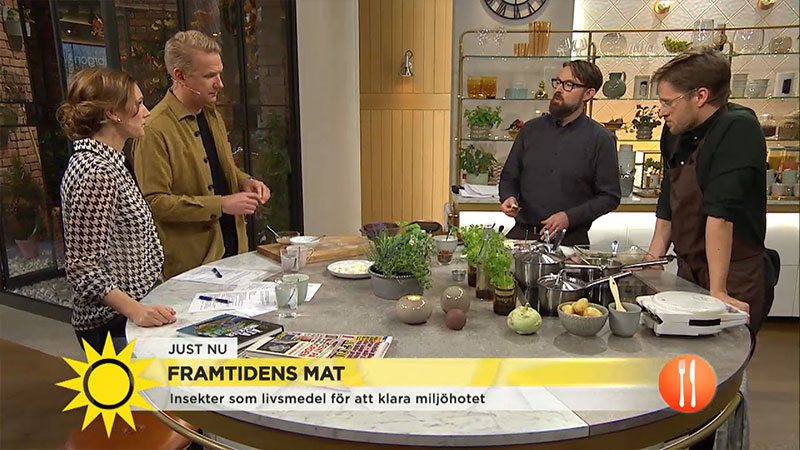 I think we will have some really interesting months ahead of us!