The bread contains 100 mealworms or “mjølmums” which is Larveriets way of trying to give them a more appetizing name. Photo: Larveriet

The other day I was excitingly waiting to pick up my DHL delivery from Finnish Entis when I received equally exciting news from Sweden’s other neighbouring country Norway. Invertapros food brand Larveriet has together with the bakery Bakehuset launched a bread containing 2,1 percent dried mealworms. The bread called Mjølemums is sold in 22 stores belonging to the food store chain Meny, and the hope is that every shop will sell around 10-20 loafs of bread a day.

Cool news, and cool to see that things are also happening on the Norwegian ento scene! My feeling is that among the three Nordic countries that allow insects as food (Norway, Denmark and Finland), Norway have been a bit slower on adopting edible insects. The big insect hype lately has been in Finland. There a lot of companies where prepared to launch products when edible insects became legal late 2017. Among them big food giants like Fazer who made news all over the world when they launched its cricket bread, a bread that probably has inspired and paved the way for Norwegian Mjølemums.

Since then the initial hype has died down in Finland and it’s mostly the convinced entopreneurs that are developing new products. One good example is Entis from Turku who started out making chocolate cricket candy, and since then launched smoothies and its meat replacement Sirkkis. And now: Bugbites.

Bugbites is sold as a protein snack in pouches weighting 50 grams. That sounds like a really small amount, but the snacks are really light weight and the whole content fills up a bowl. Bugbites comes in two flavors: natural and dark chocolate. When eating the natural one it’s mostly the crispy texture you experience and the taste of 26 percent oat flour. The 7.5 percent crickets (gryllodes sigillatus) mostly add iron, zinc and proteins to the product. The added chocolate (that decreases the oat flour to 18 percent and the cricket powder to 5 percent) makes it more snackable and tasty. 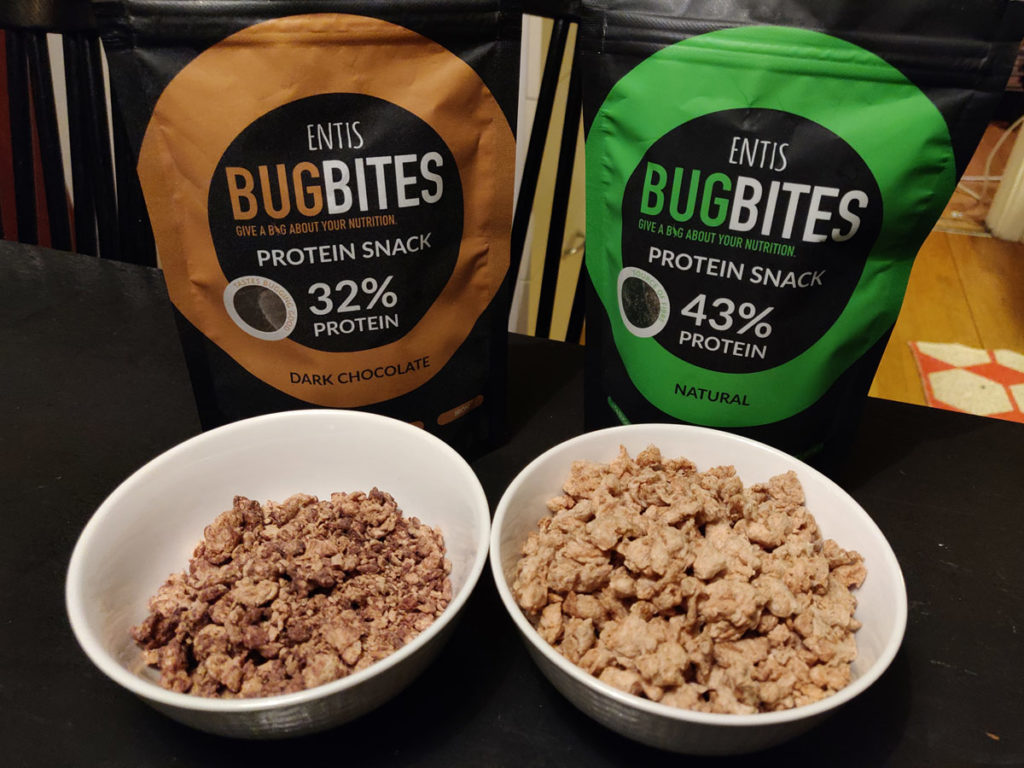 Two bowls with snacks (unfortunately its not all content, I ate some before I took the photo :)

From a culinary point of view Bugbites isn’t that interesting, the selling point is nutrition. The natural one boasts 43 percent protein, high levels of iron and zinc, and just 1 percent sugar.
I would also say that the product is clever and versatile. Making a dry, light product that can be cheaply and easily shipped and sold on the internet is great. Being dry it also has great shelf life and as a reseller you have a good chance selling the product before it gets old.
It also works really well as both snack and a topping on you bowl of granola.
When I went to Finland the last time I bought Samus cricket granola. 9 euro for 200 grams in a box almost the same size as the Bugbites it really felt expensive. Buying these packages of bug snacks for 3,5 euro sprinkling some bug bites on your favorite granola makes more sense.

Not just sense, it feels good adding the nutrient and it tastes really good in a bowl. My 11 year old daughter was really excited and got even more excited when she tasted the dark chocolate version.

My only problem with the product (as nearly always with these “stealth insect products”) is that the cricket content is so low. If there had been 50 percent crickets we would really have a lot of proteins, vitamin b12, iron and zinc. Now a lot of the proteins probably come from the soy protein isolate. The explanation is cost. Samuli Taskila CEO of Entis, tells me that almost half of the price for ingredients comes from crickets, even though the percentage is low. Looking forward to a future when you can get the insects much cheaper and really make the most of the crickets great nutritional profile. 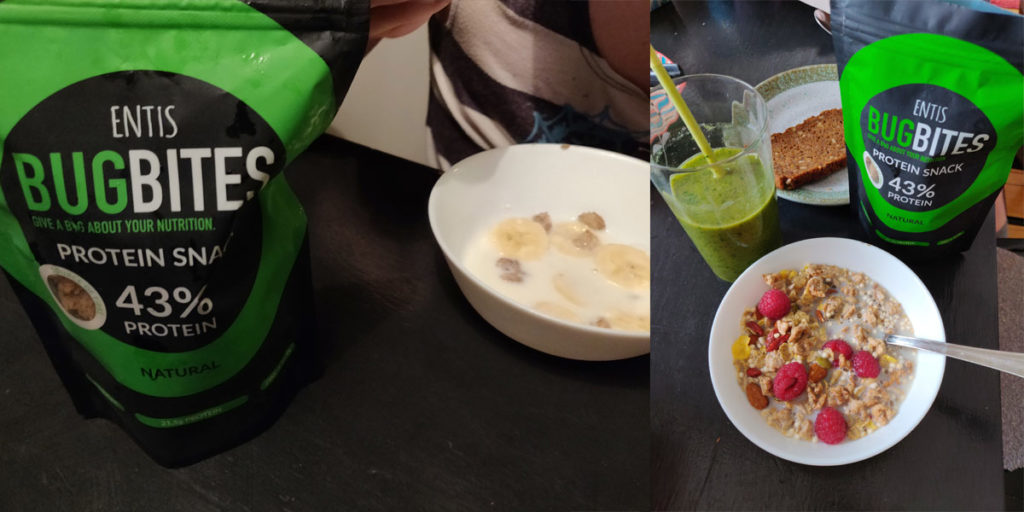 My daughter really enjoyed Bugbites with milk and bananas. On the right my breakfast bowl and smoothie.

When prices do go down (they will) I hope we will see a Bugbites Enhanced Edition with at least 20 percent crickets. Until then let’s enjoy Bugbites as a snack, on your granola, in your smoothie or maybe even as porridge. I think I will try some cooking with it.

Bugbites is sold at a couple of gyms and shops in Finland but can be ordered online from Entis Bug Shop. 3,5 euro a pack, and free shipping all around the world (including Sweden :) if you buy for more than 50 euros! If you just want to try one pack (for 3,5 euros) the postage is 2 euros. If you buy for between 3,6-50 euros the postage varies depending on where you want the package delivered.

Regarding this review:
This is not a payed post. The only bribe I got was the test products :)
If you have products that you want tested by Bug Burger, please contact me.
But beware: if I don’t like the product I will say so :)